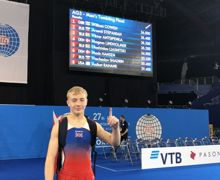 British success in Tokyo is something we might be well-accustomed to next summer, but our Year 11 student, Will, has already triumphed in the Far East in The World Youth
Gymnastics Championships this year, winning Gold in the Tumbling discipline. A keen gymnast since the age of three and a tumbler for the last eight years, it's fair to say that Will's rigourous training régime - two and half hours a day, five days a week - has paid off.

Already a winner at the European Team Championships, Will progressed through the preliminary round to ultimately emerge victorious in a diverse and large field of competitors in his age category. Myself, a non-world champion, I was fascinated to ask how he deals with the pressure of flawlessly executing a routine when the spotlight shines, "I don't really get nervous to be honest" Will said, adding that a bit of nerves before "give him the edge".

Will says as tumbling is not an Olympic sport, it’s his aim to one day attend the World Games. He is certainly well on his way to getting there!

Congratulations to Will for winning Gold at the 2019 World Youth Gymnastics Championship.

Written by Harry- Year 13 Student
Back to News ListPreviousNext